There is no stronger sign of writing incompetence than starting a blog with a passage about how difficult it is to write a blog. There are millions upon millions of things happening in the world every day, so really only a complete thickie would have nothing to write about.


I personally have lots of things to write about. I want to share my experience of racing Sprint Cars with you. I want to tell you about the forthcoming Kart race at ASI. I want to remove from my chest the burden that is my grievance with the French Automotive industry. I want to tell you how Team Awesome is getting on and my plans for Joe’s future in racing. I want to explain how one of the sponges in our kitchen exploded for no apparent reason before my very eyes.


My problem is, would you find it interesting? To a good writer, this wouldn't be a daunting task. A good writer could make a ham sandwich interesting. But I'm not a good writer. I'm an apprentice to the world of writing. A Watson in an industry of Holmes. A Robin in a sea of Batmans [Batmen?]. I am the unwanted pineapple on the pizza of storytelling.


That said, you can’t win if you don’t play the game. So like that time with Hercules and the onion, I'm going to vanquish my demons and tell you some interesting things about stuff.


When I first went to Warneton to test drive a Late Model back in 2006 (CAMSO V8 as it was then) it was fantastic. Here we have a car that weighs around 850kg packing 450BHP. I knew straight away, I wanted to race it.


Since that time Late Models have gone up in weight and down in power. The new crate motors come in at 400BHP and the weight is now somewhere north of a metric ton. To drive one on its own is not as much fun as it used to be. 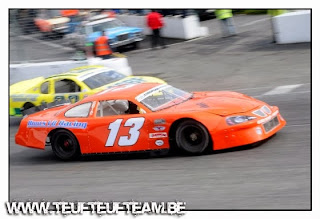 I haven’t driven one with the new-fangled braking system that was introduced last year, but with the old GM style caliper, you have to start braking somewhere near the port of Calais to make turn one at the Belgium track. Once in the turn, you can pretty much mash the throttle. It is the bumps in the road that make the car skittish, not the performance.
And what about those bumps? Warneton Speedway has never been the smoothest race surface in the world, but nowadays you would be better off with a Land Rover than a Late Model. The track has more lumps and bumps than Gerard Depardieu's face.


The Sprint Car weighs about as much as an empty pillow case and the engine rules allow enough tuning for a engine builder to make around 500bhp possibly more. The cars are lively and their massive tyres and wings provide a phenomenal amount of grip. They too, do not stop very well. The brakes on the front of a UK Sprint Car are slightly worse than the ones on my BMX. This is a bit disconcerting given the speed you arrive at a corner, which is faster than a Late Model and a lot faster than my BMX. The Sprint Car does have a larger rear brake, however. This is designed for turning the car more than slowing it down. Braking harder doesn't retard your speed so much as it ensures you arrive at turn one going backwards.


Not being able to slow the Sprint Car down isn't really that important anyway. The grip allows it to carry more speed through the turn. It allows you to pick up the throttle earlier, and fires you off towards the horizon very rapidly. Again, at Warneton, it is only the bumps that upset the balance of the car.


So, as a car, the Sprint Car is very good. But that does not make a Late Model bad. This is like comparing Ben and Jerry’s ice cream to Haagen Daz. They are both tasty, cold and a perfectly acceptable substitute for sex.


Where the Late Model scores highest is in the actual racing. Racing Late Models is more fun than squeezing blackheads on to a mirror. And there is so many Late Models that it is difficult not to have a race regardless of what position you are in. Overtaking in a Late Model can be a clumsy, messy affair with paint swapping, panel beating and races often being won by mere inches rather than feet, seconds or laps. 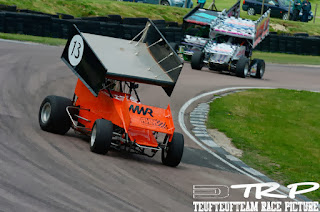 In UK Sprint Cars you get a handful of drivers going very fast in a line. Overtaking in Sprint Cars is a risky business. Late Models can barge by each other with little chance of repercussion. Try the same thing in a Sprint Car and you can expect to find yourself upside-down and on fire. This, in turn, makes Sprint Cars very exciting to do, though probably less exciting to watch. There simply isn't enough Sprint Cars out on the track at any one time.


Then there is the dirt. The Sprint Cars race at Coventry and at Horndean. These are shale and chalk tracks respectively. I'm not sure if this is a good thing or a bad thing, but it is certainly different. It adds a whole new dimension to the driving experience.


The Late Models don’t have dirt. They have Venray, which is definitely a good thing. The half-mile oval at Venray is the best oval in Europe and driving there is simply breathtaking.


If you are thinking about budgets and you live in England (and probably even if you don’t.) The Sprint Cars are more cost effective.  Between April and October, they do about one race a month. Tyres last forever because the races are short. The most expensive races on the schedule are Warneton, but there are only two of those.

To race a Late Model you need a big trailer or one with no sides. The cars won’t fit on a 6’6 hauler. You only have a couple of races in the UK and you are racing at Warneton a lot. And that is not cheap if you are hauling the car from the UK each time. You are allowed 12 tyres per season and you will need all of them.


There is a lot of damage in Late Models though it is mostly superficial. There is less damage in Sprint Cars but when it does happen, you will probably need another Sprint Car. And another driver.


In conclusion, I do not believe one is better than the other.  The pros and cons of each series will depend on which aspects of racing you prefer.


Me? Well, I think we need a full-bodied stockcar that weighs about 600KG and has 500BHP and only races on the half-mile at Venray. And maybe Lydden Hill.
Until such time, I shall just flit between Sprints and Late Models.


After all, they are the same, just different.

All together now: “Ebony and Iv-o-ry live together in perfect har-mon-y...

***All the crap you see written here is Kelvin's opinion and not that of his associates, race team or marketing partners.***

Posted by Kelvin Hassell at 06:30 No comments: