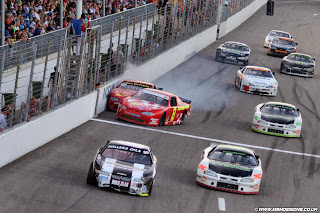 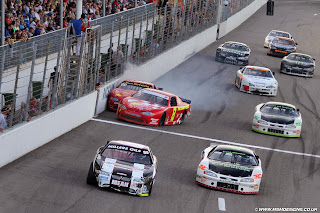 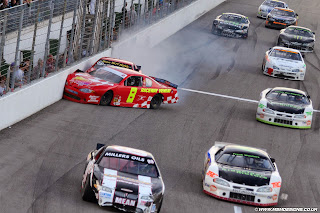 Trying to stop racing drivers using their preferred “Racing Line” when they are competing on the ovals is difficult. It shouldn’t be, but it is.
“It’s dead simple.” I say, “The banking is steeper the closer you get to the wall. The more banking you have, the more grip there is. The more grip there is, THE FASTER YOU CAN GO!”
But still, they turn in high, drive down to the apex and then drive out of the turn.

I am at Raceway Venray. I am trying to explain to one of my Roots V8 Racing protégés why his lap times are not improving at the rate he would expect. Fortunately however, I have been given the day off and, although I am keen for my driver to go faster, that is not the reason for me visiting the Dutch track.

I am here to drive an ASCAR. West-Tec Racing’s long retired two-seater car has been making a comeback in the V8 Late Model Cup. The car, originally for driver training and promotional work, is a modified version of the old ASCAR chassis that used to frequent Rockingham many moons ago.

The Rockingham idea was based on the old adage “If you build it, they will come!” ‘It’ being a big oval and ‘They’ being NASCAR.  Sadly, it transpired that what actually happens when you build ‘It’ is ‘they’ tell you to stick it up your pipe because shipping the Winston Cup to England is simply too damn expensive. A hasty re-shuffle later gave ‘It’ some shallower banking and turned ‘They’ into the IRL, who were only too happy to come to England as the dying American single-seater series had very little to lose at the time.
The lack of NASCAR moved Rockingham to introduce its own stock car series. ASCAR was born using a Howe designed chassis and a sealed 430BHP V8 engine. Money was poured into the series to help it build momentum but eventually the money dried up and the series collapsed.

The car I would be driving was one of 8 that belonged to West-Tec and were purchased by Raceway Venray to showcase its new oval. The car is roomier than one of the Roots V8 Racing Late Models and reminded me a bit of the ARCA car I used at Rockingham a while back. (That’s Rockingham, North Carolina; not Rockingham, Corby.)

Venray is a beautiful venue. The grandstands were pinched from Silverstone after the home of the British Grand Prix had its last refit. The oval is 1km in length with corner banking in the region of 21 to 25 degrees. There is a smaller oval in the infield (home of the BriSCA F1 World Cup!) and a kart track, which I am yet to see used.
I had the privilege of driving this track whilst it was being built. I was asked to come and test some rain tyres before the circuit owners had even finished laying the last bits of tarmac. (That is one of the things about racing American stock cars at Venray, you have to race come rain or shine.) So I have seen the venue grow from the very beginning. In my humble opinion, it is one of the best stock car ovals in Europe.

Today though, I was here as a racing punter. A rental driver in the only available ASCAR for the weekend. The #8 Chevrolet two-seater car. Raceway Venray sells drives in its many ASCARs for 500€ per race day. A bargain anyway you look at it. The price does not include new tyres (About 160€) or fuel (About 100€). What they do include in the price is your own mechanic. He is there to help you do stuff on your race car. He sets your tyre pressures and fills it with fuel. Though to be honest, when I wanted a wedge adjustment later in the day, I just grabbed a jack and did it myself.

As I work for Roots V8 Racing, A rival team that also rents cars for racing at Venray, I expect you would like me to offer an unbiased comparison of the two. Well then, I shall try…
The Roots V8 Racing cars are 1000€ per race day and yes, on the face of it that is double the price. However, it does include fuel and tyres. The Roots cars are newer and of a different spec to the ASCARs. In the big scheme of the Late Model V8 Supercup, the performance of the two cars is about the same. In my opinion, the Roots cars are easier to drive. With Roots V8 Racing, you also have a former Late Model champion to help you with the mechanicals and the set-up.  Pays your money, takes your choice as they say.

Because I haven’t done any Late Model racing this year, I was instructed to start at the back with the other Rookies. I didn’t mind this. I’m driving a car I only saw this morning on a track I haven’t been to in two years. It seemed to me like a reasonable request. I was handed a 16th place starting slot, kind of the front row of the last group.

I was interested to note that the ASCAR was set up to run in third gear. ASCARs benefit from having what is called a Quick-change rear-end. This means it is a simple task to change the final drive to a ratio which allows you to use maximum rpm in fourth gear at any race track. This is both easier on the gearbox and liberates the little power that is used for turning stuff that doesn’t need to be turned.

Anyway, third gear it was. So when the green flag dropped I stuck it in third and got going. The first race was tentative to say the least. Getting used to a new car, reacquainting myself with the speedway, learning about the new drivers in the series and how they behave on track. I finished 8th in my first heat and after a 9th in the second, I felt comfortable enough to start playing with the setup. Nothing big, just a couple of turns of cross weight to try to unhook the back of the car as it passes through the center of the corner.

I line up 8th for the final race of the day and move up to fourth in the opening laps. The ASCAR feels good in the high groove but pretty uninterested in racing on any other part of the track. I try to go under the #99 car for third. The front unhooks and the car understeers towards the wall. The car finds some grip on the race track just in time to stunt the slide and avoid the impending impact. Fourth is good, I think to myself, I always liked fourth.

Fortunately the first and second place cars look like they will take each other out anyway. First place is the smooth and fast Colin White. The multi-Hotrod world champ and Ginetta racer is being harried erratically by a gentleman who is clearly going to kill the pair of them if something isn’t done soon. Over the radio I can hear race control telling the driver of the second place car to stop being a prat or words to that effect. Eventually he would earn himself a black flag. Meanwhile, I’m still following the #99 and now the very fast #5 car is coming up on the inside. Not much to do here, I have to let him go. At this point, I must have drifted down the track somewhat. The car behind thought this would be the ideal opportunity to try and fit between me and the wall. He is now at my blind spot and as I resume my high line into turn one, so we wreck.
The car turned violently right, wiping its nose on the wall. The back then joined it. The car scrapped along the wall at well over 100mph. I did what all amateur racers do at times like this; I started adding up the likely damage. Nose section, fender, quarter panel, one wheel maybe two, TCA, UCA, Panhard bar, The brake pedal is hard so the caliper must still be there…
It took all of turns one and two to scrub off the speed and get the thing down to the infield.
I got out.
I was not happy.
My first thought is that the other driver got onto my bumper and turned me. After I had calmed down and looked at the pictures I decided that it was my fault. Then, I looked at the video and decided it wasn’t. There is a white line around the length of the turns at Venray. We were told in practice that we must be above this or below it. That would decide the high/ low line. I was clearly on the high side of it, so if the guy was faster, he would need to pass low.

Such is life. The race is done now and what happened happened. There are photos and videos on Youtube for you to observe and make you own conclusions.
The damage was too much to repair over night for the following day’s races. I went back to the Roots V8 camp to resume my words of instruction and encouragement to the driver of the #4; “High groove! Always! And see where you are braking? Don’t. Go in faster! Brake less! Power power power!”

Mr Walsh, driving the Roots V8 Racing #4 Ford Fusion actually had a much better weekend than me. He finished all his races and made some steady improvements.  I had a crash and didn’t race at all on Sunday.

Maybe I should be taking some instruction from him instead.

***All the crap you see written here is Kelvin's opinion and not that of his associates, race team or marketing partners.***
Posted by Kelvin Hassell at 08:54